Nov 30, 2021
Rep. Tom Suozzi announced Monday that he’s running for New York governor next year as a “common-sense Democrat” focused on kitchen table issues, potentially posing a thorn in the side of Gov. Hochul, who’s vying for election on a similarly centrist campaign platform.
Suozzi, a two-term Long Island congressman with a moderate legislative track record, is the fourth candidate to hop into the crowded gubernatorial race, with Hochul already facing progressive primary challenges from State Attorney General Letitia James and city Public Advocate Jumaane Williams.
Asked in a wide-ranging press conference why he’s better suited for the job than fellow centrist Hochul, Suozzi said that he’s a “common-sense Democrat who gets things done.”
“I don’t pander. I’m straightforward. Get things done, based upon what’s the right thing to do, regardless of, you know — you can’t put me in a box,” said Suozzi, who served as Nassau County executive before his 2017 election to Congress.
Though he didn’t want to be ideologically pigeonholed, Suozzi floated traditionally centrist proposals on a range of policies, including taxation and crime.
“Property taxes and income taxes in New York State are just too high, and it’s stopping us from being successful,” said Suozzi, whose congressional district includes most of Nassau County and a sliver of northeastern Queens. “We have to reduce regulation, we have to make it more attractive for people to be here. In New York State, crime is a big issue. We have to make sure that we fight crime, we have to get more cops on the street.“ 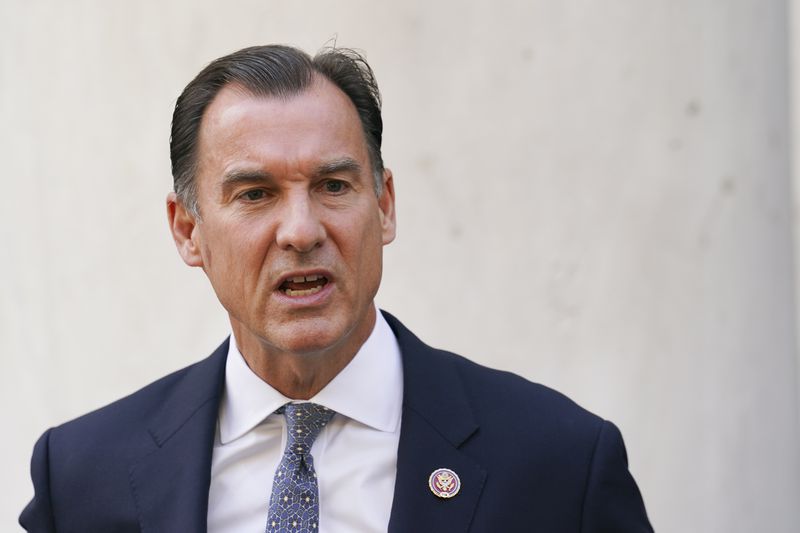 Further bolstering his middle-of-the-road credentials, Suozzi said he’s against a carbon tax in New York — “that should be dealt with at the federal level” — and voiced opposition to the “Good Cause” eviction bill, a left-wing legislative priority in Albany that would make it harder to kick New Yorkers out of their homes without a court order.
“We can’t just make it so you can’t evict anybody under any circumstances whatsoever,” he said. “It doesn’t make sense.”
Suozzi’s announcement — which came on the heels of his turning down a top job in Mayor-elect Eric Adams’ incoming administration — is seen as a complicating factor for Hochul, in that she was previously the only moderate in the race.
A formidable fundraiser, Suozzi has a strong base of support on Long Island, a traditional bastion of moderate voters that Hochul would likely lean on to counteract the city’s large progressive electorate.
Hochul’s campaign did not return a request for comment on Suozzi’s entry into the race.
Some political strategists pleaded with Suozzi in recent weeks to stay out of the race and focus instead on getting re-elected to Congress, since Democrats are at risk of losing their House majority in the 2022 midterms.
Suozzi’s district is seen as particularly vulnerable, with Republicans flipping several county-level seats on Long Island in this month’s municipal elections.
But Suozzi shrugged at the prospect of his party losing power on Capitol Hill.
“Congress is great, and I’m hoping we’re gonna win the majority again, and we may not, we may — it doesn’t matter,” Suozzi said. “I’m running for governor, because I believe that this is the job that I am made for. Everything I’ve done has prepared me for this particular job at this particular time.”