The IPPB or Indian Post Payment Bank has invited the aspirants to apply online in order to appear in a recruitment test which will take place by June 2022. Deadline for online application form is concluded and the IPPB is likely to release the IPPB GDS Admit Card 2022 at ippbonline.com. To appear in the recruitment test against the post Gramin Dak Sevak candidates has to carry the print copy of the IPPB GDS Hall Ticket 2022 to the test centre. There are a total of 650 vacancies for the post of Gramin Dak Sevak and a large number of candidates are going to appear in the recruitment test.

In the recruitment test 120 MCQs will be asked from 7 different sections, the weightage of every question will be 1 mark. To pass the examination, a candidate has to score the minimum qualification mark, which will be announced after the commencement of the recruitment test. Selection for the post of Gramin Das Sevak is going to be done on the basis of recruitment test and interview. Those who qualify the written test will be called for the interview. The concerned officials haven’t even made any announcement regarding the exam date, but it is expected to take place in June 2022.

The cut off marks for the General category candidates are likely to be between 100 to 107 marks, an individual has to prepare for the examination with great efforts because numerous candidates are going to take part in the recruitment test. Online application for the post of GDS was begun from 10th May 2022 which lasted until 27th May 2022. Total vacancies of Gram Dak Sevak are divided for various States/UTs, Examination will be held in all the States at many examination centres.

Methods or steps which will help you to download the www.ippbonline.com 2022 Hall Ticket for the post of GDS (Executive) are listed below. This is all about the announcement of the hall ticket for the post of GDS. In case you face any error in downloading the admit card for the post of GDS then contact IPPB officials by mailing them. It is mandatory for the candidates to carry an identification document with the print copy of the IPPB Hall Ticket 2022. 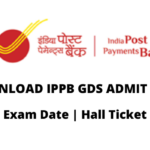