Nuclear Powered Flying Hotel – Is it Real? Facilities and Cost 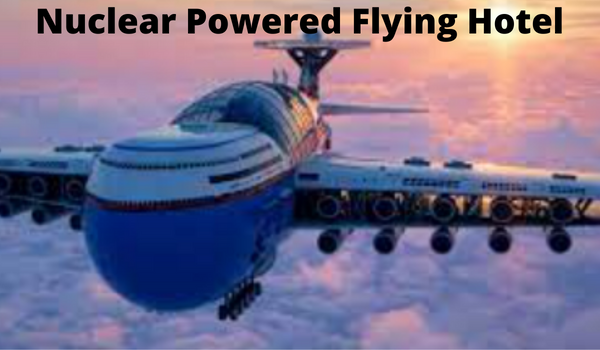 The artificial intelligence-controlled sky cruise has ushered in a new era of technological advancement by incorporating a configuration of 20 engines fueled by nuclear fusion. It has been speculated that the new design would allow for around five thousand passengers to travel through the air in the lap of luxury. There will be no need for the nuclear powered flying hotel to ever touch down on Earth, and customers will be transported to and from the sky cruise on conventional passenger aircraft.

A massive “flying hotel” fueled by nuclear energy and comes replete with a gym and a swimming pool is planned to transport 5,000 people in unrivaled luxury. A new computer-generated animation (CGI) video explains how the artificial intelligence (AI)-controlled Sky Cruise will be able to stay in the air for months while still landing to pick up new passengers or let anybody on board exit the ship. The future mix of an airplane and a hotel, fueled by nuclear fusion and has 20 engines, is not intended to ever touch down on the ground.

The impressively realistic model of the giant airplane was constructed by Hashem Alghaili, who also claims that the nuclear-powered sky cruise “may be the future of transport.”
In addition, Alghaili says that ongoing repairs would be performed in-flight, something that has never been done in aviation history. The system will operate 24 hours a day.

A passenger asked how many people would have to be on board such a massive aircraft, and he replied, “All this technology, and you still want pilots? “

I do not doubt that it will function entirely on its own.” Even if there are plans to make the Sky Cruise a man-free journey, there will still need to be a large number of crew members on board to attend to each passenger’s needs.

The hotel does not exist, much to our regret. The computer-generated image (CGI) technology was used to produce the eye-catching visuals of the hotel. The hotel designers have high hopes that it will one day be turned into a functioning establishment.

Aside from the entertainment deck, the aircraft includes a shopping mall, a sports center, a restaurant, a bar, a playground, a theatre, a bridal chapel, swimming pools, and conference rooms. The airplane is fully prepared for any situation that might arise. The aircraft has no official release date just yet.

In addition, it has an elevator that travels up to the main entertainment deck and links the panoramic hall there. Shopping malls, a sports center, swimming pools, restaurants, playgrounds for children, theatres, and movie theatres can all be found on the primary deck dedicated to amusement. Additionally, it has a particular area devoted to organizing events and professional gatherings.

It’s always interesting to discover something new, so here’s a new one. Among the clouds, you will enjoy an exquisite meal. Approximately 5,000 people can stay at Sky Cruise, a futuristic, enormous flying hotel powered by nuclear energy. There is a gym and a pool on board, along with the capability of traveling through space. Tony Holmsten created the idea. Hashem AI-Ghaili, a producer and director renowned for his graphical science and technology documentaries, handled the overall design.

Sky Cruise will remain in the air for days or even months if artificial intelligence is used to operate it. Because of how it was constructed, it is impossible ever to touch down. Twenty nuclear fusion engines will provide the propulsion for the journey. Upon completion of the journey, we will pick up the passengers and return them to their respective locations. Sky Cruises are used to repair and maintain airplanes while in the air.

Some people have referred to the Sky Cruise idea as the “new Titanic,” and they have pointed out a variety of problems with the way it is designed. The massive airplane would have trouble taking off and wouldn’t be very aerodynamic because of its size. Others pointed out flaws with its weight, suggesting that an aircraft fueled by a nuclear reactor might potentially destroy a whole city if it crashed.

A nuclear reactor deployed in the sky could fail and plummet to Earth, as it was deemed a “great idea.” While another passenger replied, “I don’t know if I could afford the lowest deck with very little leg room and no access to the lounge,” I thought to myself, “I am sure I can.”