India President Election Result – Who is new President of India 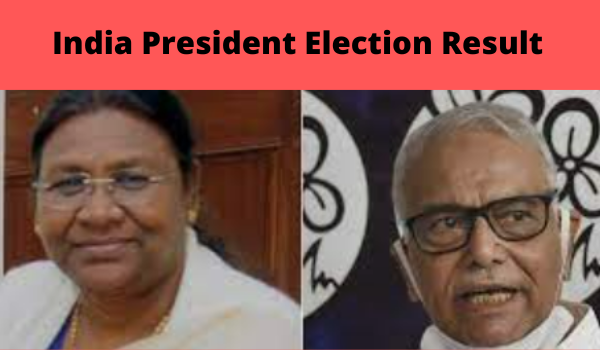 Several opposition groups gathered in Delhi to select a presidential candidate on the same day as the nomination process began. The nominations may be submitted through June 29, and the evaluation of the papers will take place on June 30. It has been determined that the final day to withdraw from the electoral contest will be July 2. On July 21, the counting will take place at this location. On July 24, the current President of India, Ram Nath Kovind, will complete his tenure in office. Read the article to know about India President Election Result.

The Election Commission of India announced the election date for the 16th President of India on June 15 of this year. The regulations stipulate that the election must occur before the current President’s term in office is close.

Because current President Ram Nath Kovind will step down on July 24, the Election Commission decided to hold the next presidential elections on July 18, 2022. Opposition parties have nominated Yashwant Sinha as their undisputed presidential candidate. In contrast, the BJP-led National Democratic Alliance has put forth Draupadi Murmu, a tribal leader and the former Governor of Jharkhand.

On July 21 of this year, voters will go to the polls to cast their ballots in the presidential election. It is important to note that the people of India choose the President of India in a roundabout way via the election of their elected representatives.

Who is the new President of India

On Monday, over 4,800 elected MPs and MLAs will vote to choose the 15th President of India. The NDA nominee Droupadi Murmu has a distinct advantage against the Opposition’s Yashwant Sinha, as it is anticipated that over 60 percent of votes would be cast in her favor.

The polling will occur in Parliament House and state legislative assemblies, which have already received voting boxes.

Murmu is a tribal leader of the party, and he is from the state of Odisha, which is located in eastern India. Her birthday is June 20, and she was born in the hamlet of Baidaposi, situated in the Mayurbhanj region of Odisha.

Since the state of Jharkhand’s inception in the year 2000, she has been the first person to serve as its Governor for the whole duration of her tenure (2015-2021). Between 2002 and 2009, Murmu continued to serve as the Mayurbhanja district president for the BJP. After beginning her professional life as a teacher, Murmu joined the political arena in Odisha in 1997.

After the news was announced, the current Prime Minister of India, Narendra Modi, stated his belief that the former Governor of Jharkhand would become a “wonderful President” by devoting her life to the betterment of humanity.

As said, Sinha resigned from his position in the BJP party. When Prime Minister Chandra Shekhar was in power (1990–1991), he served as the Minister of Finance.

He served in that capacity once again under the leadership of Prime Minister Atal Bihari Vajpayee from March 1998 to July 2002. Between July 2002 and May 2004, he served as the Minister of External Affairs for the coalition.

Sinha was an officer in the Indian Administrative Service (IAS). He entered the IAS in 1960 and was a member of the service for almost 24 years, during which time he held many key appointments.

Candidates must first satisfy all the requirements to be eligible for the position of President. Applicants are required to be Indian citizens, at least 35 years of age, and not occupy any positions of profit under the government of India or state governments.

Additionally, the candidate will require the backing of fifty more voters who are registered in the electoral college (seconders). The Election Commission first proposed the idea of proposers and seconders in 1974 to discourage candidates who have a poor likelihood of winning from submitting nominations.